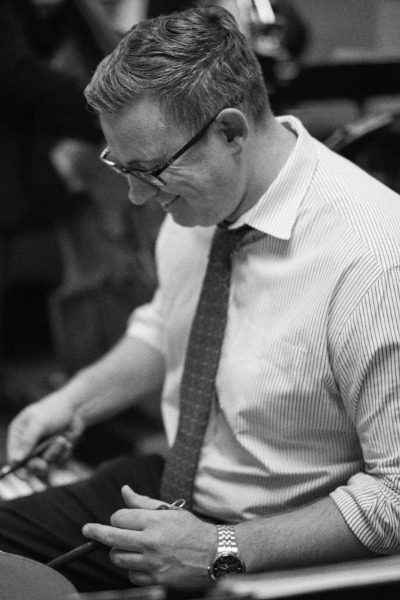 Dr. Jason Nicholson is a multi-faceted percussionist and educator based in Logan, UT. He is Associate Professor of Percussion at Utah State University (USU), where he has taught since 2009. Equally at home in the world of classical percussion, drum set, and world percussion, Dr. Nicholson has been described as “a gifted performing artist and highly-regarded percussion pedagogue.”

Dr. Nicholson’s students have been accepted into prestigious music schools such as the University of North Texas, the New England Conservatory of Music, the University of Northern Colorado, and the Ohio State University. His students consistently win awards at the Utah Day of Percussion competition and work as band directors or percussion instructors in South Carolina, Texas, Utah, Washington, and California. Prior to his current appointment, Dr. Nicholson was an adjunct percussion Instructor at Winthrop University in Rock Hill, South Carolina, and the Director of Percussion at Rock Hill High School. In 2019, Dr. Nicholson was selected as the Teacher of the Year for the Caine College of the Arts (CCA) at Utah State University.

Dr. Nicholson is a highly in-demand performer in many genres including solo, chamber, orchestral, world music, rock/pop, and jazz. He recently appeared as a featured performer with the Aggie Music Project (USU’s faculty jazz ensemble) at several internationally renowned jazz festivals, including the Montreux Jazz Festival, the Umbria Jazz Festival, and the Viennes Jazz Festival; at the 2015 World Saxophone Congress in Strasbourg, France. He has worked as an active freelancer in North Carolina, South Carolina, Florida, Texas, and Utah, including in performances with the Corey Christiansen Trio, Charles Craig Trio, and the Charlotte Symphony Orchestra. He can be heard performing drum set and percussion on numerous recordings such as Nate Ostemiller’s, If I Should Care; The Aggie Music Project’s, Starless Night; the USU Chamber Singers’, Devotion; and with the University of North Texas Wind Symphony on their Percussion Palooza (with the UNT percussion faculty and Keiko Abe), Altered States, and Transformations. He was also a featured performer at the 2006 Percussive Arts Society’s International Convention alongside the University of North Texas Wind Symphony, UNT Percussion Faculty, and marimba virtuoso Keiko Abe.

Dr. Nicholson has received many awards throughout his career, including the Caine College of the Arts Researcher of the Year (2013), the Outstanding Graduate Percussionist of the Year at the University of North Texas (2006), Award for Academic Merit at the University of Miami, and the Presser Award for an outstanding undergraduate music major from Winthrop University. Dr. Nicholson received a Bachelor’s in Music Education from Winthrop University, a Master’s in Percussion Performance from the University of Miami, and a Doctor of Musical Arts in Percussion Performance from the University of North Texas. He has studied with many well-known pedagogues; his major teachers include B. Michael Williams, Rick Dior, Mark Ford, Christopher Deane, Ed Soph, Robert Schietroma, Keith Aleo, Ed Smith, Jose Aponte, Poovalur Sriji, Fred Wickstrom, Steve Rucker, Louis Abbott, Steve Bagby, Peyton Becton, and Carol Stumpf. He is a D’Addario Performing Artist, a Tama/Bergerault Educational Artist, a Zildjian Educational Artist, and is a member of the Black Swamp Educational Team.