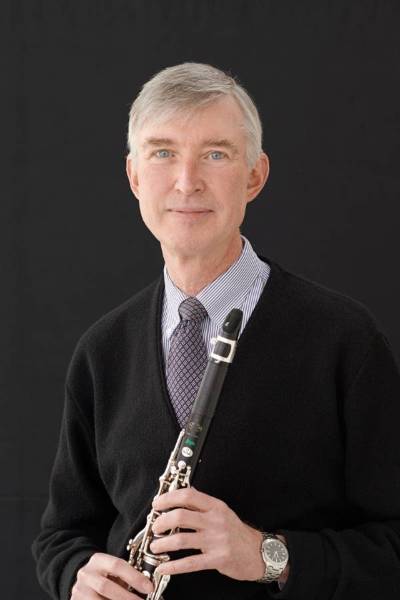 Nicholas Morrison is Professor of Clarinet in the Department of Music at Utah State University, where he also serves as music director of the USU Summer Alumni Concert Band. He has appeared as soloist with the Orchestre Philharmonique Ste. Trinité in Haiti, with the Notre Dame, New World, Fry Street, and Arcata String Quartets, and with the Utah Festival Opera Orchestra. He is frequently called upon as an adjudicator, clinician and guest conductor throughout the Intermountain region and has served as chair of the Research Committee and Editorial Board of the College Band Directors National Association. He has performed as clarinetist with the South Bend, Tallahassee, Jacksonville and Utah Symphony Orchestras, the Grand Teton Music Festival and the Utah Festival Opera Orchestra, and is a founding member of Logan Canyon Winds, USU’s faculty wind quintet. As a member of ~AirFare~ flute-clarinet duo with flutist Leslie Timmons, he is on the Utah Arts Council’s Artist-in-Education roster and serves on the faculty of the Chapel Hill (NC) Chamber Music Workshop. He has premiered works by Libby Larsen, Valerie Coleman, Jeff Scott, Keith Gates, Dennis Griffin and Philip Parker and currently serves on the board of the Flute-Clarinet Duos Consortium, a group dedicated to the commissioning and presentation of new works for Flute-Clarinet Duo. Morrison has received grant support from numerous sources, including the Utah Arts Council, Utah Humanities Council, Target Corporation, U. S. Department of State, Presser Foundation, Dana Foundation, and Marie Eccles Caine Foundation. He is President of the board of the Cache Children’s Choir and board member for community service with the Rotary Club of Logan, Utah. Morrison holds degrees from the University of North Carolina-Chapel Hill, the University of Notre Dame, and Florida State University and has studied with Curtis Craver, Donald Oehler, Scott Bridges, Sidney Forrest, Freddy Arteel, John Bruce Yeh and Frank Kowalsky.