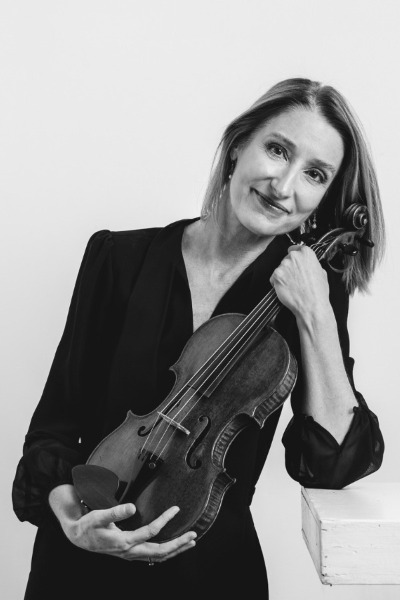 Rebecca McFaul is a founding member and violinist of the Fry Street Quartet as well as a Professor of Professional Practice at Utah State University.

Hailed as a “triumph of ensemble playing” (New York Times), the Fry Street Quartet has perfected a “blend of technical precision and scorching spontaneity” (Strad Magazine). The FSQ holds the Manon and Dan Russell Endowed String Quartet Residency at the Caine College of the Arts, Utah State University, and maintains a busy concertizing schedule alongside their dedicated teaching career. The FSQ has been expanding the role of the arts in society with groundbreaking new works and collaborations. The Crossroads Project is an ongoing partnership with physicist and educator Dr. Robert Davies with two original multi-disciplinary performance pieces to date, Rising Tide and Emergence, which are meditations on global sustainability. Crossroads productions have been staged more than 40 times in 3 countries, and have involved visual artists, filmmakers, actors, and composers. Beyond the Crossroads Project, the quartet continues to champion voices of contemporary composers in traditional concert settings with commissioned new works by Clarice Assad, Michael Ellison, Gabriela Lena Frank, Laura Kaminsky, and Libby Larsen. Originally from Wisconsin, Ms. McFaul received a B.M. in violin performance from the Oberlin Conservatory as a student of Marilyn MacDonald and continued her studies earning a M.M. with Gerardo Ribeiro at Northwestern University as a Civic Orchestra Fellow. Under the mentorship of Marc Johnson of the Vermeer quartet, Ms. McFaul founded the Fry Street Quartet in 1997. Shortly thereafter, the group received a three year “Rural Residency” grant from the National Endowment for the Arts, as well as invitations from the late Isaac Stern to give their Carnegie Hall debut, perform at the Jerusalem Music Center in Israel, and also to serve as Cultural Ambassadors to the Balkan States, a tour sponsored jointly by Carnegie Hall and the U.S. Department of State. Rebecca is a committed educator and has relished the opportunity to develop the String Program at USU in collaboration with her colleagues. Since 2002, the program has flourished and expanded to include initiatives such as the Caine Quartet program, an Orchestral Audition Seminar taught by members of the Utah Symphony, a Baroque Performance Practice Institute, continued guest artist master classes, as well as side by side performances with the FSQ, all of which contribute to a rich and rigorous student experience. Ms. McFaul’s students have gone on to receive scholarships to attend prestigious graduate school programs and summer festivals, won or placed in numerous competitions, and also have become excellent public school music educators. My role as a mentor is yet another form of collaboration; it is an endeavor between student and teacher born of shared investment and shared goals. While I, as the teacher, must take the lead, it is the student who must learn from the inside out. I always remind the students that they’ll never get this time back later in life, and that statement always reminds me of the scale of transformation that happens during this short time. I find that having a primary role in this transformation is at once fascinating, intensely rewarding, and a great privilege. Ms. McFaul performs on a violin c. 1720 made by Pietro Giacomo Rogeri, and bow by Nicolas Maire both on generous loan from benefactors who wish to remain anonymous.